'Rants and Retorts- A Commentary on Internet Discourse'

'Comments aren’t going away,” Samuels said. “You have to decide for yourself if you’re going to engage with the trolls. Pick your battles wisely and think about how you engage online and make sure you’re not adding to the negativity.'

'Samuels told MSR in a recent phone interview that she began examining online racist comments as early as 2008. “These were not mere differences of opinion when stories had to do with African Americans,” she pointed out. “Those writings often attacked the entire Black race.'

'I'm all for shutting it down," said Anita M. Samuels, author of the book Rants & Retorts: How Bigots Got a Monopoly on Commenting About News Online. "I understand the tenets of free speech, but it's gotten so out of hand.'

'I wanted to give a first-person view of how this affects people and how it affected me. Because if you read enough of it, it will affect you, even if you don’t want it to,” said Samuels, who was at the Bronx Documentary Center in Melrose last Saturday, for a discussion and book-signing.' 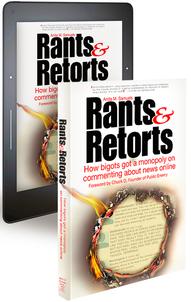 Author Anita M. Samuels, the guest on:  'Make it Plain,'

'Can We Make Comments Sections Great Again?'
by William Bender

'…Observing comments in general, Samuels picked up on patterns in online behavior. Instead of commenting to add to a conversation, most do so just to get a reaction. People just let the vitriol fly in ways that would not be wise to allow in person and face to face. Connecting how the online cesspool has spilled over into our political discourse, she points out how unfiltered and unwise our current president is. “President Trump is like a walking, talking comments section”, said Samuels.'

– from Rants and Retorts – A Commentary on Internet Discourse,
​Marc W. Polite – Polite On Society

Online comments degrading Black women are all too common and certainly not new. As the author of Rants & Retorts: How Bigots Got a Monopoly on Commenting About News Online, the initial words from O’Reilly and Spicer, and the subsequent offensive comments, are, unfortunately, familiar to me. The verbal attacks on the women, who were overtly disrespected while performing their duties in high-profile jobs, quickly became fuel for the purveyors of hate speech against African Americans on mainstream online websites and social media.